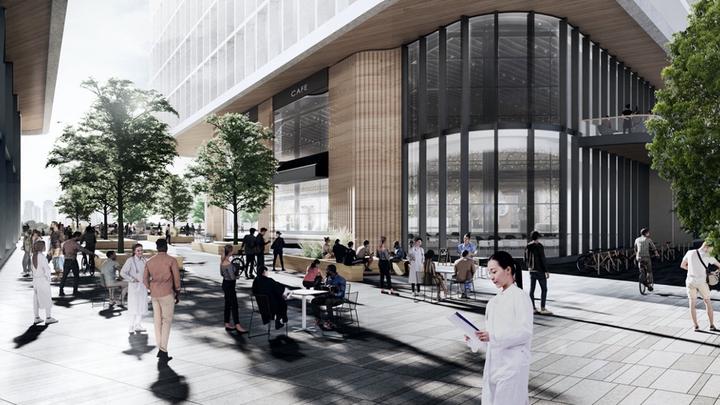 An “artistic rendering” of the future UBC site in Surrey.

Of all the ways to spend $70M, the University of British Columbia announced yesterday that it had purchased three acres of real estate in Surrey, nowhere near the Point Grey, Okanagan or Robson Square campuses. UBC did not announce a major investment in data science the way peer institutions (UofT, Berkeley) have done. The University did not double down on innovation with a leveraged investment into the Digital Technology Supercluster which is headquartered at the Robson Square campus. No major investment toward decarbonizing the economy, additional classroom space, or a new research facility was made. Nope! UBC bought the Grace Hanin Community Church property.

I found this curious so I looked into it.

Where did UBC buy?

The Grace Hanin Community Church property looks like this today:

The property is conveniently located near King George station and sits strategically between Surrey Memorial Hospital and the Surrey campus of Simon Fraser University (SFU).

The mission-aligned purpose of this real estate investment is not conveyed well in yesterday’s announcement. UBC’s press release includes “artistic renderings” with people wearing white lab coats in front of a shiny new building. How will the new building be financed? What units of the university will occupy the new building? President Ono’s quote in the press release namechecks Fraser Health and First Nations Health Authority so perhaps there are plans to use this space for medical research and training programs. Are there plans for a public-private venture to build on the purchased site? Who are the anticipated co-investors and property developers?

Is it reasonable to pay $70M for three acres in Surrey? How is commercial real estate priced? I don’t have expertise on these questions but would like to know. While this purchase may make sense as a pure play real estate investment, it would be interesting to collectively understand the business logic and the larger scope of UBC’s strategic use of land and capital managed by UBC Properties Trust.

Is this linked to the Broadway Subway Project?

A research-driven transformation of the BC economy was championed by former UBC president Arvind Gupta in an address to the Vancouver Board of Trade in 2014. Politics intervened for a while but the vision eventually took root when the Broadway Subway project was funded, albeit only to Arbutus.

With the purchase of the Grace Hanin Community Church property, UBC has a place to develop facilities near the terminus of the Expo Line.

Is this connected to the new medical school?

SFU has been working for decades to establish a medical school. On first glance, this sounds like a great idea: more doctors; new facilities; better care for everyone. However, medical schools are costly and a new operation at SFU will likely cut into funds that would otherwise be allocated to UBC’s medical school. A shiny new school at SFU will also emerge as a competitor for federal CIHR funds. UBC successfully opposed the creation of a new medical school and maintained its Lower Mainland monopoly during the Gordon Campbell and Christy Clark led era for the Province. Then things changed. The BC NDP promised a new medical school on SFU’s Surrey campus during the last provincial election. SFU provided details on plans last month in a medical school information session.

The property purchased by UBC is a short walk from Surrey Memorial Hospital.

The Province made another $17M investment for Surrey with the creation of the Quantum Algorithms Institute (QAI) in 2019. QAI is incorporated as an institute for British Columbia. That said, the Government’s document announcing QAI says the Institute “will be housed on the Simon Fraser University (SFU) Surrey campus and include partners at post-secondary institutes throughout B.C.” The QAI launch event in 2019 took place at SFU and with no representation from other universities. While UBC, together with the University of Victoria and SFU, is represented on the Board, the location of QAI could make SFU a more viable recipient of the $360M in quantum research funding promised by the federal government in Budget 2021.

From the new site in Surrey, UBC has the opportunity to establish quantum research programs aligned with and nearby the Quantum Algorithms Institute.

I look forward to learning more about why UBC bought three acres between SFU’s Surrey campus and the Surrey Memorial Hospital. A strategic unification of the higher education and health systems, newly linked by SkyTrain and improved infrastructure, has the potential to massively improve the Lower Mainland.